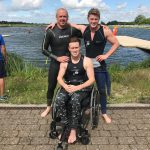 Josh Landmann has been appointed as SIA’s  Young Persons’ Ambassador. Josh 23 from near Blackpool, who is spinal cord injured (SCI), is an endurance athlete, public speaker and sit skier.

Josh was supported by Spinal Injuries Association (SIA) throughout the early stages of his injury and found support through many of the services the charity provides, including the Advice Line, Vocational Support and FORWARD magazine. Following this support, Josh went on to complete a placement organised by SIA as an intern at Williams Racing, working in various different departments including the model shop, the marketing department and graphic design.  Josh has been a vocal advocate of the charity, featuring in an interview for FORWARD magazine and attending events for the charity over the last 12 months.

Having experienced first-hand the impact that SCI can have, Josh wants to use his new role to ensure that young SCI people have the support they need to live fulfilling and independent lives from point of injury and for the rest of their lives.

In his role as Young Persons’ Ambassador Josh will campaign for the young SCI community and assist SIA with their work in keeping SCI people’s needs at the forefront of the government and the public.

Speaking about his role Josh said:

“I’m delighted to be an ambassador for Spinal Injuries Association. The support and guidance that I got from SIA when I left hospital in December 2014 was just so helpful not only to me but my parents as well. It’s not just my life that changed but my whole family. Having the reassurance of knowing we can call to ask anything we were unsure about made life that little bit easier.

When I had my injury I was just about to start university, and all of a sudden I didn’t have a clue what I was going to do or how I was going to be able to work again. Then SIA came along with a huge opportunity at Williams F1, where I was placed for several months working mainly in the model shop but experienced several different departments throughout the company. Finding a place to work, or going back to university was the hardest part for me so I hope I can help make a difference to other young people who may have suffered a spinal injury to realise there is a positive future and an exciting life to live after a spinal cord injury. I’m now embarking on a Paralympic dream, aiming for Tokyo 2020 to compete in Para-triathlon.”