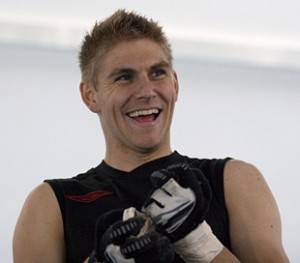 Whilst in hospital rehabilitating from his spinal cord injury in 2005, Steve was supported by SIA and he was so impressed with the service, that he joined the Peer Support team to help pass on the same support and motivation that he had received himself. Steve left his role as a Peer Support Officer in 2008 to pursue his blossoming Wheelchair Rugby career, which saw him captain the Team GB squad at London 2012 and being part of the presenting team at the Rio 2016 Paralympics.

Steve has stayed in touch with SIA throughout, often attending events to share his experience of spinal cord injury with guests and hosting our 2016 Rebuilding Lives Awards. Steve was confirmed as an official SIA Ambassador in September 2016 and says of this role,

“The support that the Spinal Injuries Association gave to me, in those early days, has helped me to grow into the person I am now, so I hope I can use my position as Ambassador for the charity to spread the word about the good work that they do.”