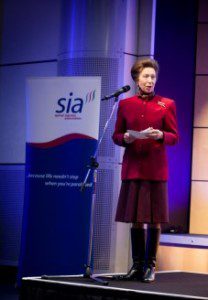 SIA’s Patron, HRH The Princess Royal, has been a great source of support and encouragement over the years.  She became the Patron on the 10th anniversary of SIA in 1984 and has faithfully supported the organisation as it has grown and developed over the years.

The Princess Royal regularly attends SIA events and was the guest of honour at SIA House in Milton Keynes when it was opened in 2005.