Andy Cadle-Mills sustained a T4 (complete) spinal cord injury in 2008. Since then he’s had pressure sores on four separate occasions, but none of them in the more common, high-risk areas. He and his wife, Jane, are keen to raise awareness of these less common examples of pressure sores, to help other people avoid them developing. 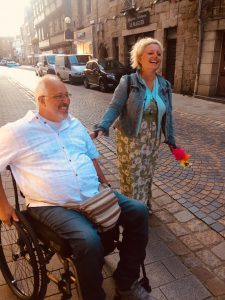 Andy has had a pressure sore in the same place, right at the base of his back, three times in five years. After the second time we worked out that it wasn’t due to sitting or seams or anything rubbing. We were in contact with the Spinal Unit at Salisbury who couldn’t understand how it was happening either. I finally worked out that it was due to the transfer board hitting him in this area each time he transferred. I could see by the shape of the wound and dimensions of the marks. Recently it has happened again and each time it takes about six-eight weeks to heal.

“We use manuka honey dressings which we buy ourselves. They are expensive, about £1 a dressing, but Andy’s skin really responds well and heals quickly once the healing begins. Initially it gets worse before it gets better.

“Of course, he also keeps off the area and sleeps on his side rather than his back. We do all the usual things which were taught to us at the Spinal Unit. He is extra careful when transferring and further protects the area when he is getting into his wheelchair (we use various materials to pad the edge of the sliding board) as well as using a sliding sheet for moving around in bed and when getting into the shower chair. Tricky stuff but it works!

“The second area where he has had a pressure sore is the bridge of his nose due to an ill-fitting CPAP mask. Andy has had a broken nose and the mask was putting pressure on the bridge on one side. This took a good few weeks to heal and the only way to fix it was to change the mask. Not always easy to get through to someone in the NHS to do this and the alternative was not to use the mask, which was risky as Andy has severe sleep apnoea.”

Jane and Andy have found various creative ways to help relieve pressure where they’ve learnt from experience that a repetitive movement risks potential damage over time.

For advice or ideas on how to relieve pressure, specific to your lifestyle and situation, get in touch with SIA’s Support Line 0800 980 0501.