They’ve only gone and done it!!  The team managed to reach Gilman’s Point goalpost on the summit after a long and exhausting expedition to the apex, which saw them battle treacherous terrain, altitude sickness and exhaustion.

What Martin and his team have accomplished five years on from the Manchester Arena attack that left Martin with a complete spinal cord injury is incredible. A remarkable effort that has taken hours of dedication and training to get to this point.

The team’s goal is to raise £1 million for SIA to support more people affected by spinal cord injury.  If you can, please donate using the link below.

If you haven’t been following the Martin’s Mountain journey, here is what you need to know:

Martin Hibbert was the closest person to the 2017 Manchester arena terrorist bomb to survive. As a result of the bomb, 22 people lost their lives, 1,017 were injured and thousands of people were personally and deeply affected by this attack.

During the incident, Martin’s spine was severed by shrapnel, leaving him with a T10 complete spinal cord injury and fortunate to be alive. Despite this horrific trauma, Martin was determined to turn tragedy into something good. 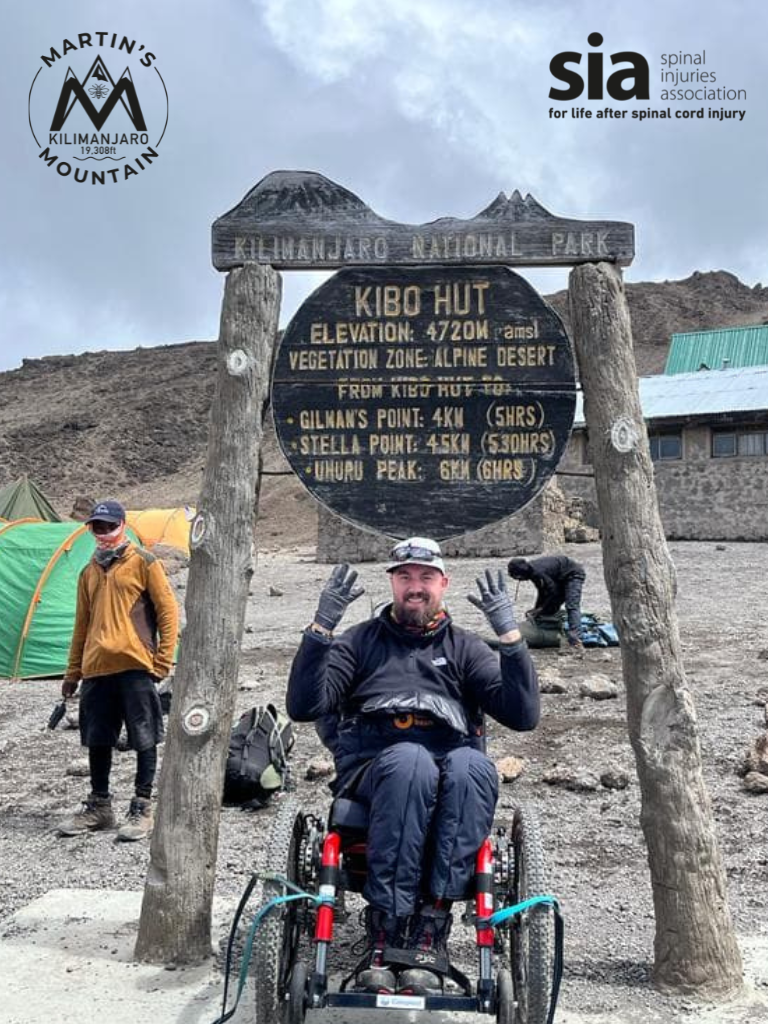 Martin Hibbert at Kibo Hut on Kilimanjaro the day before climbing to the summit.

What is Martin’s Mountain?

We have supported Martin since his injury and a few years ago, Martin decided that he wanted to give something back by taking on a massive challenge to try and raise £1 million for the charity. He asked what the hardest physical challenge that he could set himself was. The answer? Climb to the peak of Mt. Kilimanjaro. And so, Martin’s Mountain was born.

In June 2022, after more than a year of preparation, Martin took on this mammoth challenge with a support team including close friends and specialist nurses. It took six days for the team to reach the crater at the top of the mountain, more than 19,000ft above sea level. Along the way, the team faced massive challenges, including multiple team members sent down due to altitude sickness. For Martin though, he was a man on a mission. With support from his team, including a group of expert local guides, Martin reached the top of the mountain. A phenomenal achievement.

However, for Martin, this challenge was never just about reaching the highest peak in Africa. The climb was just one step a personal mission to raise awareness of the endless everyday mountains that those affected by SCI must face, from inaccessible infrastructure, to lack of sexual function, to pressure sores; and what more should be done to help address the challenges.

How did the team climb the mountain?

Climbing Kilimanjaro was ultimately one of the toughest physical challenges ever taken on by someone affected by paralysis. The views were stunning, but the physical strain on the bodies of every climb team member was immense.

Whilst on the climb, Martin used a specially made trike, designed by Mountain Trike (pictured below). This trike used levers to manoeuvre and has comfortable padding, as well a multitude of other modifications. Despite these adjustments, Martin’s body was battered by the hard and uneven mountainous terrain. His arms were also burning as he used his muscles to keep the trike’s wheels moving in the right direction by pumping the levers.

On the most inaccessible parts of the climb, the team used ladders, pushed and pulled the trike using elastic straps, and lifted and moved the trike in mid-air.

The support team consisted of specialist nurses and a physio, as well as local guides who know the mountain better than anyone else.

The route that the team took was the Rongai route. This path guided up the mountain over six days, navigating difficult terrain, including forests, moorland and volcanic rock. 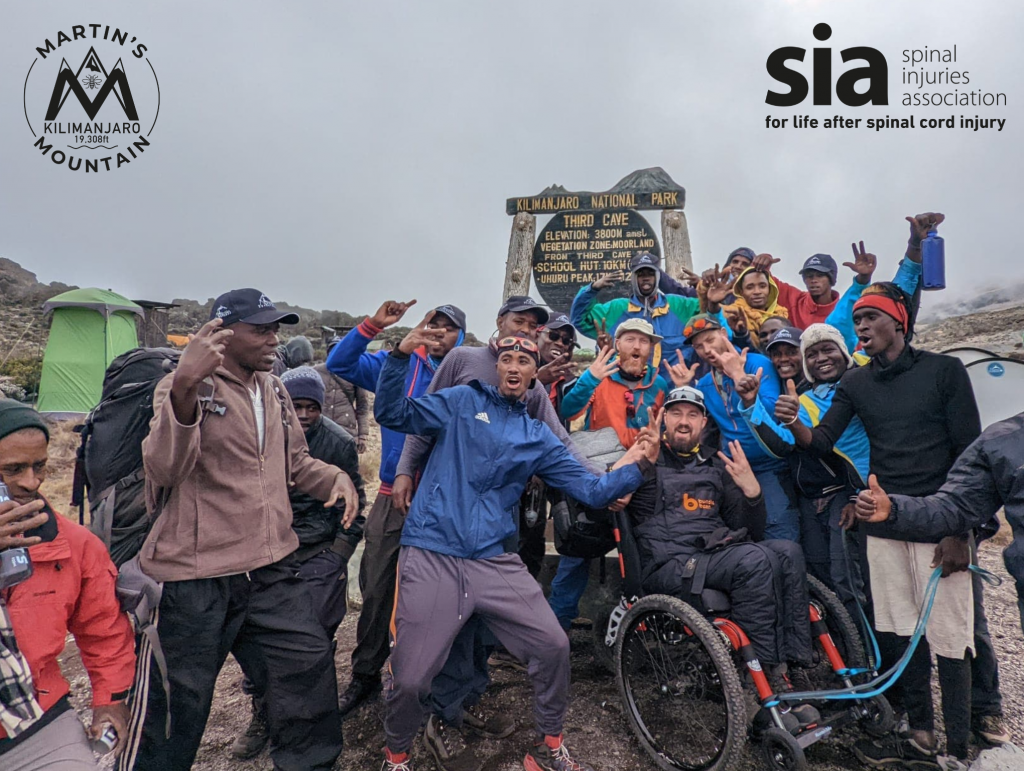 However, the biggest challenges on the mountain for Martin were maintaining a healthy bladder using an indwelling catheter, a functioning bowel and regulating skin temperature. These are some of the biggest obstacles that impact people with a SCI and being on the mountain without access to medical resources only made things far more difficult. Without proper care and consideration, Martin could  have easily suffered an infection, which would have brought any climbing ambitions to a quick halt.

Finally, the altitude of the mountain meant that towards the peak, the levels of oxygen in the air were dramatically reduced. The altitude also means that the temperature can drop well below freezing at the summit. This was a massive concern for Martin.

However, despite all these challenges, Martin and other members of the team made it to the top of the mountain, defying all odds. An incredible achievement and we are so proud of everyone involved.

Where will the money raised go?

The Martin’s Mountain team hope to raise £1 million for SIA whilst also promoting awareness of the impact that a spinal cord injury can have. All of this money will go towards helping to make our ambition of a fulfilled life for everyone affected by spinal cord injury a reality.

How can I support Martin’s Mountain?

donate to Martin’s mountain here
If reading Martin’s story of climbing 19,000ft has inspired you to take on some fundraising to support Martin’s Mountain, you can set yourself a #MY19 challenge.

Find out about #MY19