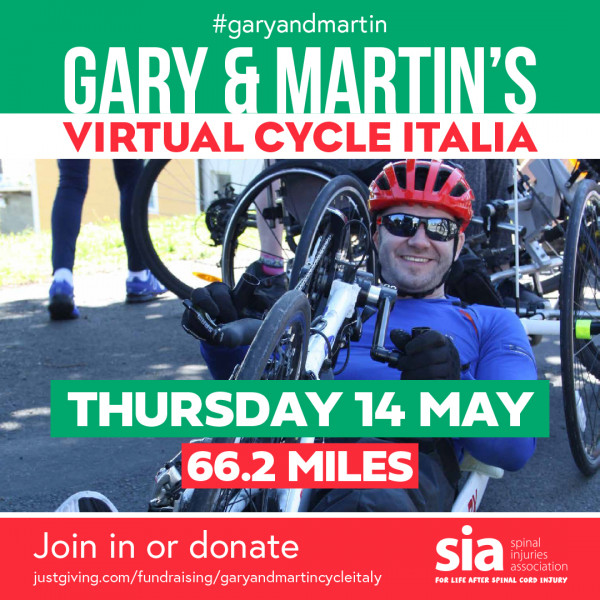 “I would do anything for Gary. He helped me, and now I want to help him.”

Martin Hibbert, paralysed during the Manchester Arena bombing in 2017, agreed to cycle across Italy with our Support Network Officer, Gary Dawson who has supported his rehabilitation ever since.

On the day Martin Hibbert was told he would never walk again, he met our  Support Network Officer, Gary Dawson.  Martin was in hospital and starting the long process of recovering from injuries sustained during the Manchester Arena bombing. He was the closest person to the explosion to survive and sustained 22 shrapnel wounds whilst shielding his daughter, also severely injured, from the blast. He had become spinal cord injured – paralysed from the waist down – and having to come to terms with the formidable task of rebuilding his life after injury – physically, emotionally and practically.

Gary Dawson meanwhile – also paralysed, from a motorcycle accident 17 years ago – was working with SIA to use his personal experience of spinal cord injury to help others rebuild their lives. Sitting in his wheelchair next to Martin’s hospital bed, he used his experiences to build hope, confidence, and the practical skills for Martin to rebuild his life and start again. However, as time went on, they also built a remarkable friendship.

“Being told that you’re not going to walk again is a shock. I quickly learnt from Gary that despite having been told some devastating 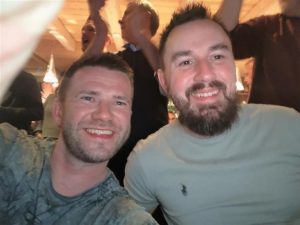 news, it didn’t stop me from leading a full life.”

Since that initial support, a deep bond was forged. Gary helped Martin as he returned home to his family, completed his rehabilitation and re-built his career as a top-level football agent. Martin’s progress has been nothing short of remarkable, which he attributes fully to the support given to him by Gary.

“To see Gary in a wheelchair and understand that he was injured and has been through what I was going through, I decided that I didn’t want a wheelchair to determine what I was and was not going to do”.

Gary, has undertaken every single one of our gruelling international cycle rides since they started, raising over £30,000 alongside his family and friends. However sadly, this year’s ride to Tuscany was cancelled when Coronavirus hit. 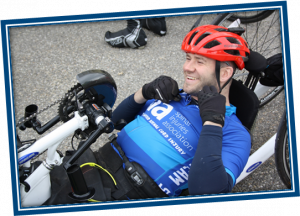 Determined to do their bit, Gary and Martin hatched a plan.  They would do the first day of the planned ride to Italy, but virtually, in isolation, in their front rooms, on their hand cycles.  They have been training ever since and on Thursday 14th May, with the gradients programmed into their fixed hand bikes, they will begin the gruelling 66 miles across Northern Italy – all from their living rooms in Greater Manchester.  Of the plan Martin said:

“66 miles is going to be tough, and the longest challenge I have done, but it will be easier knowing that Gary is (virtually) right beside me.”

And now they need you! 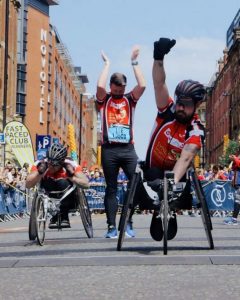 during the Coronavirus crisis. Its support line, teams of expert nurses and support teams (mostly paralysed themselves) have seen unprecedented demand for information advice and support by spinal cord injured people, isolated and worried about their health. SIA is keeping thousands safe, healthy and out of hospital, saving lives and protecting the vital resources of the NHS.

“I was gutted when we had to cancel the bike ride. But then I thought – I’ll do it anyway from my living room.”

A team of SIA riders from past and present overseas cycles are taking part, alongside an eager peloton of supporters: with an aim to raise as much awareness, and vital funding as possible. We want the world to join them and support other spinal cord injured people and give them the chance – like Martin – to rebuild their lives and do amazing things after catastrophic injuries.

Visit: https://justgiving.com/fundraising/garyandmartincycleitaly now to share messages with Gary and Martin, and support their amazing effort!