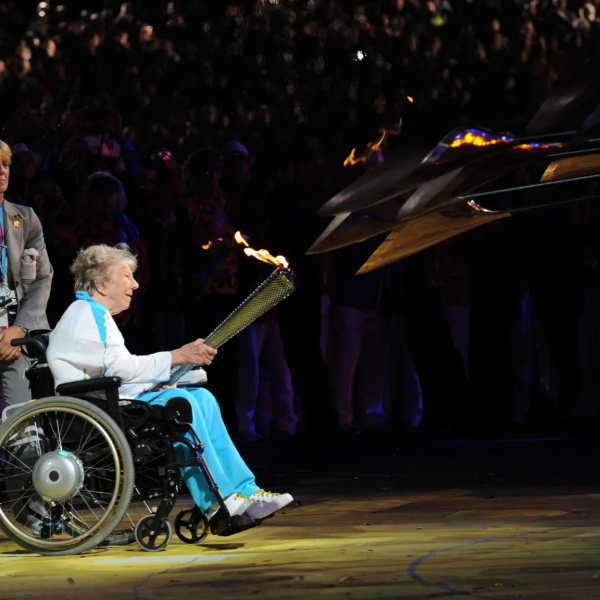 We were deeply saddened to hear this week that Margaret Maughan, Britain’s first gold medal winning Paralympic athlete and long-term supporter of the spinal cord injured community has died aged 91. Our thoughts are with her family at this time.

Margaret had been injured in a road traffic accident in Africa in 1959 and returned to UK for treatment at Stoke Mandeville, which at the time was pioneering the use of sport as therapy and rehabilitation. She pursued sport with her customary enthusiasm and won her first gold medals in both archery and swimming in the 1960 Games in Rome. She missed the 1964 tournament and was fourth and fifth in two archery events in 1968, but was back among the medals in 1972 with gold in Heidelberg, then took two silver medals in Toronto in 1976 and silver and gold four years later in Arnhem. She later returned to Stoke Mandeville to coach at the club.

In 2001 she and her friend, Sally Haynes, joined the volunteers supporting the work of our PSO,  Jackie Bailey at Stoke Mandeville.  Jackie recalls:

“Margaret had led an extraordinary life both before and after her SCI but always spoke so matter-of-factly about her experiences. She was an amazing lady, always immaculately turned out, with a smile that lit up her face and not a bad word to say about anybody. She was a pioneer for us all in sport, travel & work though she didn’t see it that way … she was just making the most of the opportunities that came her way. A lesson for us all.“

In 2012, she again returned to international prominence as she was the final torchbearer and lit the flame at the London Paralympics opening ceremony.  She told the BBC at the time:

“I feel very proud to be at the start of all this. From just a team of 70 British people in wheelchairs at the first Games, now there are hundreds from all disabilities.”

“Our thoughts are with Margaret’s family at this difficult time. Margaret was one of the earliest members of SIA and did so much to help other SCI people. Her life is a remarkable and lasting testament to the possibility of a fulfilled and active life after injury, and in changing forever the perceptions of disability. For that, we will remember her.“

The family have kindly requested that rather than send flowers for the limited funeral if people would like to make a donation to either SIA or Wheelpower both of which Margaret was strongly affiliated to, they would be most grateful. Thank you to Margaret’s family for remembering SIA at this time of loss.