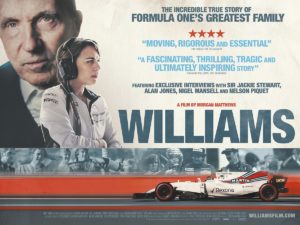 Charting the story of Formula One’s most celebrated family, Williams is a thrilling account of how one man built a racing empire and a vivid, heart-rending portrait of the aftermath of a tragedy, based on the 1991 book by Lady Virginia Williams – A Different Kind of Life. The film premiered at The Curzon Mayfair, London on Tuesday 11 July, attended by Sir Frank Williams, family, sponsors and supporters. Spinal Injuries Association was delighted to have been invited to the premiere and was excited by the new film, and the depiction of spinal cord injury. The film is out for general release on Friday 4 August.

The film follows Frank Williams, founder and owner of the Williams Formula One team, who started working as a travelling grocery salesman to fund his racing career as a driver and mechanic. He founded Frank Williams Racing Cars in 1966 at age 24, and ran cars in Formula Two and Formula Three, working with famous F1 names including Piers Courage and Tony Trimmer. Williams faced adversity through his career, at one point using a phone box to conduct team business having had his phone disconnected for a lack of payment, but he made it to the pinnacle of motorsport in 1972. The Williams team’s first win in Formula 1 came in 1979 at the hands of Clay Regazzoni in the FW07, at Williams’ home track; Silverstone. From there both he and the team went on to win six more drivers’ championships and eight constructors’.

Frank’s dogged determination particularly shone through following an incident in 1986. Travelling to Nice airport following a test at the Paul Ricard Circuit, Williams lost control of the rental car he was driving and crashed into a field. He suffered a spinal fracture and became tetraplegic, requiring the use of a wheelchair. He hasn’t let this stop him though, and even over thirty years on from the crash he’s still a regular at race events.

“This film is a tale of two great loves in my father’s life. Everyone knows of Frank’s pure passion for motor racing, but not everyone knows the remarkable story of my parents’ marriage and how those two things co-existed during the highs and lows of the team’s journey.

“I am pleased that it shines a light on exactly how instrumental my mother was in the team’s success while also capturing the setbacks and her bravery in holding the family, and ultimately the business together, as the team went on to make history. We are incredibly proud of the film and its enduring message of what the human spirit is capable of achieving in the face adversity. I hope that inspires people as much as my parents’ story inspires me.”

The film is a hit with Frank himself as well, with him saying, “I hope the fans enjoy the film as much as I’ve enjoyed being part of motor racing. I’m glad that both the people behind the team and my family come out as the true heroes of the story.”

The film will excite and delight Formula One and Williams Martini Racing fans of all ages as they become fully immersed and get to experience the true story of one of sport’s most iconic teams, Williams Racing.

The premiere is on Tuesday 11 July in the Curzon Mayfair along with Williams sponsors and is out for general release on Friday 4 August. To find your nearest cinema playing the film, visit WilliamsFilm.com or buy the film on DVD here.