On a quest for spinal cord injuries 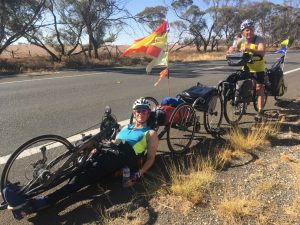 SIA Ambassador Karen Darke had always been an athlete, finding a passion for running, climbing and orienteering. But after she fell off a cliff and became paralysed from the chest down at age 21, she didn’t know what was next.

Whilst initially she didn’t know where to turn, or what her future looked like, she soon learned that with friends, creativity and perseverance most of the things she wanted to do, see and achieve were still possible.

Karen has spent over a decade as a full-time athlete, winning a silver medal in the London 2012 Paralympics and gold in Rio 2016.

Karen says: “I’m proud of winning a gold medal in Rio, as I never saw myself as an athlete. I always remember pushing my first-ever half marathon just months after my SCI. I was so slow there wasn’t even a finish line any more as the organisers had packed up and gone home. Years later when I started handbike racing, my first few races were like that too. It goes to show that if we decide we want to do something and put our mind and efforts to it, then surprising things are possible.”

“I decided I would cycle seven continents and nine rides (one on each continent, and two Paralympic Games), and I’d encourage others to join me who perhaps had never done anything like that before.”

As a coach, counsellor and sports psychology coach, Karen is passionate about helping others get from where they are to a place they would like to be. She has a couple more of her own Quests to complete. One is trying to get to the Tokyo 2020 Paralympics. The next is the continent of Antarctica and the aptly named ‘Pole of Possibility’.

“It will be a huge challenge,” Karen admits, “but we plan to take on the frozen continent in January 2022, creating a new pole at 79 degrees latitude and longitude called The Pole of Possibility. We’re trying to get 79 schools, families, individuals or companies involved in fundraising for SIA and to gather all of their names on the flag that we’ll plant at the Pole. We’re also seeking a few corporate connections who would like to partner on the project to make getting the team to Antarctica a reality.”

More about Karen’s Quests and what motivates her to challenge herself and help transform others’ lives,  will appear in the next issue of our magazine FORWARD.