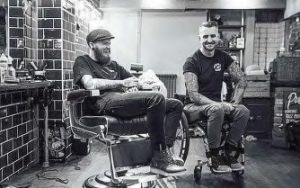 Inspired by the support he received from his friends following his SCI, Steven Aitchison decided he wanted to give something back and set up a clothing and merchandise company for those who refuse to give up.

On 25 July 2015, I was on a night out in Hebden Bridge with some friends. On the way back to the train station we were messing around, as lads do after a few drinks, when one of my friends decided to push my other friend and I over a wall and into a bush – or what he thought was a bush. It turned out the ‘bush’ was actually a tree growing out of the other side of the wall, which had a 20ft drop straight down to the canal side. The fall shattered all but two of my ribs on my right side, punctured my lung and separated my spine at T12/L1 (complete), leaving me paralysed.

Like many people who have an SCI, mine happened by pure chance and came as a total shock to my friends and family. I’ve seen some friends and relatives really step up to the plate and help, while others have faded away.

It’s also changed my relationship with my girlfriend and I have gone from being the ‘manly’ man, to having to rely on her for help. It’s the little things like being the one who opened doors for her before, to now being the one let through ﬁrst. The untold toughness that it puts on a partner and on a relationship makes me so unbelievably lucky to have such an amazing girlfriend by my side – even if she does occasionally put chocolates out of my reach. She rocks, I roll.

Setting up a new company

I was 33 when my accident happened and I wanted to go back to work. I was previously an industrial electrician and was unable to return to that role, as during my time in hospital my former employer was unable to ﬁnd me alternative work within the company.

It kind of came about by chance, when on the ﬁrst anniversary of my accident, a group of my friends got together and arranged an awesome day of events to raise money to help me when leaving hospital. We did it around the theme of ‘can’t quit’, mainly because I thought it was a great message, and because there was space for the letters to be tattooed across my knuckles!

After receiving such support I wanted to do something where I’d be able to give back and hopefully inspire other people to ‘not quit’ along the way. Nine months from that day, Can’t Quit Cartel was launched as a clothing and merchandise company for those who refuse (or just don’t have the option) to give up.

Before setting up my company I had zero business management experience. This entire experience has been a massive learning curve – mistakes have been made and sometimes still are! Every day is a school day, but I’m enjoying the journey of learning, improving and growing. Some days you win, some days you learn.

When starting I did seek the help of SIA and the job centre, which was helpful and pointed me in the direction of some really useful resources and tools.

If someone else with an SCI is looking to set up their own business, I’d say go for it! While I wouldn’t say we’re lucky ending up with an SCI, we are lucky in that you can create a business that’s ﬂexible to you. There are so many opportunities out there now – you can blog, have a YouTube channel, online store, clothing and merchandise company – although don’t be stealing my customers!

The biggest thing I’ve learned since starting my business is that it’s tough working with an SCI. I honestly hadn’t imagined how tough. I have the utmost respect for all who go back to full-time work, as there are days when the pain or dreaded bowels just don’t want to let you work, and those days I’m so lucky that I can be ﬂexible. But, it is super rewarding being back to work, creating something cool and having a purpose each morning to get up and get your hustle on for.

This article originally appeared in our FORWARD magazine, February 2018.
More information about FORWARD.