FRANCO ANTONELLI broke his neck on 27 April 1986 and has a C3/4 incomplete injury. He shares his experiences of pressure ulcers and the huge impact they’re still having on his life… 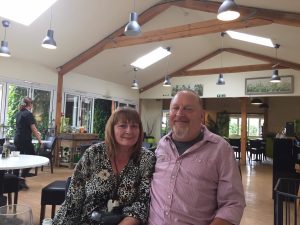 nt the first few days following my injury in a district general hospital and then I was transferred to the National Spinal Injuries Centre at Stoke Mandeville. I stayed there for six months as I went through the rehabilitation process.

“During my time in hospital I received a lot of patient education – lots of classes – so by the time I was discharged I knew how to care for myself when at home.

“About ten years after my injury I developed pressure ulcers on my heels. I started to sweat profusely and couldn’t figure out what it was. They became necrotic. I had to go to the NSIC to get them debrided. It took about a year, but they eventually healed.”

Necrotic skin – skin cells that are dead or dying – sometimes need to be removed under anaesthetic in a surgical process called ‘debriding’ if other wound treatment options are ineffective. This can give the wound a better chance of healing. Necrotic cells can slow down or prevent the healing process.

Franco explains: “There was no obvious cause for the pressure ulcers on the heels but looking back I think it was my wheelchair. I had a chair that would raise and lower my legs. I think I raised my legs too high, putting a lot of pressure on the back of my heels.

“The local district nurse treated me to start with, but she realised they were deteriorating quite quickly, so she referred me back to the NSIC. They helped me as an outpatient – cleaned the wounds and gave me dressings and instructions of what to do. It is quite easy to relieve the pressure on your heels, so the recovery wasn’t too difficult in terms of me having to restrict my movements – I didn’t have to stay in bed. You can still get out of bed and relieve the pressure on your heels. It was a much easier time to manage.”

Unfortunately, Franco has since developed another pressure ulcer – caused by spending too long on a hard mattress with a sling underneath him during an admission to a general hospital. Franco describes what happened back in December 2014 – which led to the pressure ulcer he is still living with almost six years on.

“One evening my night nurse noticed that my stats were not at the levels they should be. She was concerned that I was having respiratory issues, so I was taken into my local hospital. For about 36 hours I was placed on a hard mattress and a sling was left underneath me. That was the start of what has been a six-year journey with my current pressure ulcer.

“Within a few days I had developed a pronounced red mark and about a week later the skin broke down. It continued to get progressively worse as time went on. The pressure ulcer was classed as grade four and became necrotic. At its worst it was 6cm wide by 6cm deep. I was lucky to never develop sepsis.

“No matter what we did it just continued to get worse and opened further. It has been open ever since.

“For the first 18 months I was under the treatment of my GP and local district nurses. But I was being treated as a non-disabled person, so I eventually insisted on being transferred to the NSIC. Unsurprisingly they were not happy about the state that my pressure ulcer was in when they saw me.

“I took advice and came away again with more dressings and instructions as to what to do next. They gave me silicone biatain dressing, which was brilliant as it allows the skin to breathe (the local nurses had been using post-operative dressings). My local nurses were not keen on following the advice of NSIC but I ensured that we followed the guidance given. Things started to improve with time but I feel that the progress was largely down to me, my wife and my PAs making sure that all aspects of my care were carried out properly.

“Surgery was mentioned but I was told there was no guarantee that it would work. I was told that the wound could open again. I don’t like being in hospital and the thought of having to go through all that for something that might not work made me hesitant. I decided to stick to the more conservative treatment method and kept changing the dressings.

“The local district nurses could not understand my care needs in relation to my SCI. I tried different treatment options, vacuum pumps. I had to take the treatment of my pressure ulcer into my own hands.

“I think the knowledge of local district nurses is extremely limited in terms of how to care for someone with an SCI. You have to tell them everything and I don’t know if they always believe me when I tell them why I need my care to be delivered in a certain way. I have a good book about living with SCI and I show it to new nurses/PAs to help them understand my needs better. More so the agency PAs. The onus is always on the SCI person to be vocal about their care needs.”

As well as the risk to his physical health caused by the pressure ulcers, Franco found his mental health was affected too…

“The past six years have certainly taken a toll on my mental as well as my physical health – I thought I would never get out of bed again. It’s also taken a toll on my wife who is involved in my care. It has limited her in terms of where she can go and what she can do. I can feel the impact the last six years have had. I have very little movement as it is and I want to maintain what I do have, but obviously this has been almost impossible these past six years. It is finally healing but it’s been a long, hard road to recovery.”