GARETH REES has been nursing a pressure ulcer for nearly a year. He explains how it started and how he’s been treating it… 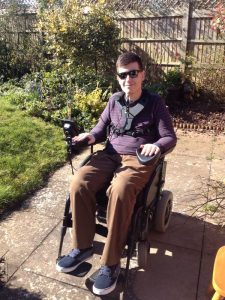 Unfortunately, I developed salmonella after a Christmas-themed special pizza, on which I can only assume the turkey was not properly smoked. I suffered for a week and after the constant washing of my skin, I developed a scab on my left buttock.

After a week in bed – missing Christmas Day – I dismissed the scab as superficial and got back to my normal routine for the following month.

The scab came off and revealed a whole world of hurt, ‘slough’ as it’s referred to, a layer or mass of dead tissue separated from surrounding living tissue. Finally taking real notice of the sore, I took another week’s bedrest at the start of February, before departing on a ski trip to Sweden. I figured the main source of the pressure in the specific area would have actually been the scab as it was thicker than I thought and this was part of my decision-making in opting to carry on with the trip.

Knowing that I was taking risks, I went down to the airport the night before, from bed to bed so to speak. I got up as late as possible to catch the flight and onto the hotel bed in Sweden as soon as possible. Based on the appearance of the slough after travelling, I stayed in bed on the Monday and Tuesday before taking part in a two-hour session Wednesday morning and returning to my bed in the afternoon. I did the same thing on the Thursday, Friday and Saturday before flying home on the Sunday.

I then spent the next two weeks on bed rest, having had a nice trip away despite the days and hours spent in the hotel room.

As expected, I was given dressing and advice including constant bed rest until the ulcer had healed and advised to apply a negative pressure (vacuum) pump once the slough had come out.

After constant bedrest, turning from side to side, and a two-week delay in getting a vacuum pump organised in my local area, the sore, which started as a 1.5cm circular hole with a 2cm depth, began to close up from the base. While using the vacuum pump I was having two visits a week from my local district nurses to change the dressings. Though there was never any of the discharge that might have been expected. After five weeks we switched from the vacuum pump to simple packing and dressing which continued on for a few more months. By the end of March, it appeared to have halved in size – and it was more of a slot than a hole by the end of April.

After speaking to other people, I then requested Flaminal from the district nurses, and was quite surprised to get it. We used this on it for around three weeks with apparent success.

By this point the sore almost looked completely healed over so I started getting into my chair twice a week for a couple of hours to test it so to speak. Though this never really appeared to cause any obvious damage to the skin, I must also admit that it can’t have helped it heal! It had been so close to healing, I couldn’t understand why it had slowed down exponentially since the start. As you may expect, I stopped getting up again.

At this point, after discussions with the district nurses, I was simply applying a piece of silver on top of the tiny hole and then covering it with a waterproof dressing.

Though I was able to continue working from my bed, obviously I didn’t want to be doing this for the rest of my life. One thing I had on my side was that everybody else was stuck at home due to COVID-19. Another was that, with live-in carers and the district nurse visiting, I wasn’t completely isolated like many people had become.

I had a bladder stone removal operation in the middle of August which required me to be in my chair on three different occasions: the pre-op assessment, the COVID test and the operation. Aside from this, from the start of August I was actually leaving the sore exposed to the elements where possible, and only covering it for my bowel routine three times a week.

After growing tired and disillusioned with the help I was receiving from the district nurses, I got in contact with Stoke Mandeville outpatient nurses. They informed me that letting it dry out was a bad idea and that I should be applying, if possible, medical grade manuka honey to keep the right moist healing environment.

October onwards – below the surface

I received a very useful phone call from the tissue viability nurse at Stoke Mandeville, advising me that even after the manuka treatment and once the skin looked completely healed, I should do another two to three weeks of bed rest to ensure the ulcer is properly healed underneath. At this point I can start getting into my chair for one hour a day.

Gareth wrote this update from his bed on October 10, with plans to continue bed rest as advised and apply manuka honey. He doesn’t need to be up and about until his flu jab on November 14, but may start mobilising sooner should the area look healthy and completely healed.