“As part of my rehabilitation at Salisbury, the one thing that was mentioned time and time again was how important it is to look after your skin.” 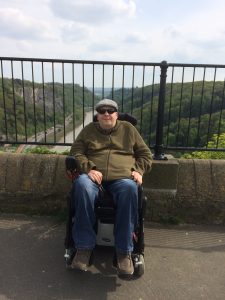 Mike sustained a complete spinal cord injury at the level C6/C7 in a road traffic collision 22 years ago. After an operation to stabilise his spine, he was transferred to The Duke of Cornwall Spinal Treatment Centre in Salisbury for his year-long rehabilitation.

On discharge he was offered a purpose-built housing association bungalow and had a care package in place that enables him to live independently, get on with his life and run his own business. But pressure ulcers threatened all of that. Mike explains how…

“As part of my rehabilitation at Salisbury, the one thing that was mentioned time and time again was how important it is to look after your skin.

“It is drummed in to you, how to avoid pressure marking, what to look for, what to do in the event of a mark, how to measure the severity of a mark and the consequences of not dealing with these issues quickly and adequately.

“As a result, I have a very diligent skin checking routine that is carried out by my carers and my wife, Stef.

“This involves a visual check of my skin and seating area every morning, to ensure that the seams on my trousers are positioned correctly and I’m not sat on them and that they are flat under my legs to avoid any crease marks.

“This routine is then repeated when I return to bed. On a personal note this can be incredibly frustrating because I’m unable to check my own skin so therefore am always reliant on other people’s assessment or pictures that never tell the true story.

“For several years after my injury I had no significant skin problems. A few red marks due to creases, which resulted in a few days in bed to relieve any pressure, but all relatively superficial.

“However, in January 2014 that changed. On checking my skin, what could only be described as a ‘graze’ was discovered at the top of my left buttock.

“We followed the ‘rules’ taught to us, and as expected a couple of days on bed rest enabled the area to heal without putting any pressure on it, however, every time I began to mobilise the area broke down again.

“This cycle continued and as a result I spent the next seven months predominantly in bed.

“During this time on bed rest I was lying on one side staring at the same wall all day. Being rendered bed- and house-bound without actually being ill is hugely frustrating. My care needs increased as I was totally immobile and my relationships with those around me started to suffer.

“I felt useless, inadequate and a burden.  All these feelings had a hugely detrimental impact on my mental health.

“This situation didn’t just affect me; it was difficult for others to have a relationship with me. I either didn’t want to socialise while lying in bed or I spent so much time moaning I was even getting on my own nerves. But the person for whom this had the second biggest impact was Stef.

“My greater dependence made it difficult for her and her ‘normality’ suffered. We missed friends’ weddings, birthday parties, we had no trips out together and we even had to cut short our first holiday for some time.

“This was during a period when I had been mobilising successfully again. A friend invited us to stay on his farm in Cornwall for a week and it couldn’t have come at a better time. We jumped at the chance, but three days in and my skin started to break down again and we had no choice but to return home.

“In short, ‘fun and laughter’ just disappeared.  However, the most difficult thing for Stef (and my carers) was having to be the bearer of bad news when on checking the wound the words “no you can’t get up again” had to be repeated!

“I was also unable to work and the possibility of reduced pay, or worse – redundancy – was a worrying situation.

“By this stage I was becoming seriously depressed and conflicting advice from different professionals was beginning to make the situation even worse. I decided to investigate the possibility of seeing a private skin specialist.

“Through my search I discovered an amazing tissue viability nurse who covered my locality. We made an appointment and within 20 minutes of meeting her for the first time my black cloud of frustration began to lift.

“The most impressive and striking aspect of the consultation was the fact that this nurse didn’t want to look at my cushion or the pressure sore, she wanted to know about me as a person: my history, my skin management regime, and this was incredibly refreshing.

“When she eventually looked at my seating and the sore, I was confidently informed that my current seating meant that my ischium bone (the bony prominence on either side of your bottom) was not getting the necessary pressure relief whilst sat in my chair, and that unless this was resolved I would be consistently stuck in this repetitive cycle.

“It was then that everything fell into place. A month before my first spell of bed rest, alterations had been made to my seating position. This slightly changed the positioning of my specialist cushion in the chair meant that my bottom was actually no longer fully sitting in the pressure relieving gel and this was clearly having a detrimental effect.

“Unfortunately, checking my pressures on this new arrangement had been overlooked by my local wheelchair services. Had they come out with their pressure mapping equipment and this simple test been done – this whole situation could have easily been avoided.

“On learning this, the relief was overwhelming. To know that it is nothing you are doing wrong and to know that, yes, the healing will still take time but that cycle can now be broken.

“We made arrangements for a seating representative to pressure map me at my home. This appointment graphically demonstrated that my pressures on this particular seating arrangement were incredibly high and that a new type of air-filled cushion would be my best option. It’s definitely helped, but…

“Having resolved and recovered from the pressure ulcers on my buttock, in March 2016 a small red mark developed on my flank. So, I sent a text message to my tissue viability nurse asking her opinion.

“The area became more inflamed and the removal of pressure was not assisting in the slightest. Within a fortnight the skin had turned necrotic and I was admitted to hospital for the area to be debrided. A straightforward exercise I thought.

“The hospital had been advised prior to my arrival that due to a previous pressure ulcer I would require a pressure-relieving air mattress.

“On admission, the ward informed me there weren’t any available in the whole of the Trust and tried to convince me the mattress on the bed would be sufficient. But after just one night, the square pattern on the mattress had transferred to every area of skin that I had lain on. This still wasn’t taken seriously. In the end I explained that without the mattress I would have to leave the hospital and return to the ward as a day patient in the morning. At that point a suitable air mattress was located rather quickly!

“After the debridement I was left with a substantial hole to my right side, which was almost as far reaching as my ribs! I was told that I couldn’t sleep on that side until the wound had healed completely. This created a further problem, as my right-hand side is the only side I can comfortably sleep on – but it was too great a risk to apply any pressure to it.

“I tried sleeping on my back and on my other side but could not get any comfort or sleep, which also had a big effect on Stef, who works full time. A hospital bed was suggested – but it wasn’t the solution I wanted. The tissue viability nurse came to visit me and told me it was crucial I got some good sleep to aid the recovery of the wound.

“Once again she came to the rescue and made an urgent application to my CCG to acquire a double mattress that was half airflow and half normal foam mattress, so that I could at least try sleeping on my preferred side. Also meaning Stef and I could continue to share our bed.

“We sensibly built the time spent on my side, as if I was mobilising after a pressure ulcer, and thankfully this worked.

“More than four years on and I’m pleased to say the wound is finally fully healed. During that time, I’ve tried every healing regime in the book, ranging from silver and honey therapy, dozens of specialist dressings and numerous types of vacuum therapy. For my care team all this meant additional training and responsibility for ensuring regular cleansing and dressing of the wound.

“For me there are several key things to bear in mind to prevent pressure ulcers: access to a tissue viability nurse; regular pressure mapping; a good understanding of all the risks and potential causes of pressure ulcers and the confidence to speak out in general hospitals if your skin integrity is at risk of being compromised.”

SIA is delighted to welcome SCI nurse specialist Damian Smith to its specialist nursing team. Damian has 25 years’ experience in SCI care and a particular interest in tissue viability. To contact him and other members of our SCI Nurse Specialist Team ring our Support Line on 0800 980 0501 or email [email protected].