We’re delighted to say Martin Hibbert and his incredible team of climbers have finally accomplished their goal of tackling Africa’s highest mountain, after more than a year of intensive training and preparation.

The team managed to reach Gilman’s Point goalpost on the summit after a long and exhausting expedition to the apex, which saw them battle treacherous terrain, altitude sickness and exhaustion. 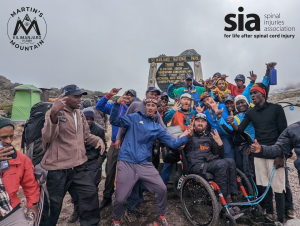 The team consisted of Martin, some of his closest friends, including a nurse and physio from Salford Royal Hospital, and a group of local guides who knew the mountain like the back of their hand.

Martin and the team were also joined on the climb by a team of BBC journalists who captured the journey in a short documentary, Martin’s Mountain: Conquering Kilimanjaro now available on BBC iPlayer.  Click on the link below to watch this epic video.

Why is Martin doing this incredible challenge?

Martin decided to take on this massive challenge to try and raise £1 million for us, after we gave him the hope, confidence and practical skills to rebuild his life.

In 2017 he was the closest person to the Manchester arena terrorist bomb to survive. As a result of the bomb, 22 people lost their lives, 1,017 were injured and thousands of people were personally and deeply affected by this attack.

During the incident, Martin’s spine was severed by shrapnel, leaving him with a T10 complete spinal cord injury (SCI) and fortunate to be alive. Despite this horrific trauma, Martin was determined to turn tragedy into something good.

The team are halfway towards their target and Martin has big future ambitions to help more people affected by SCI.

Martin Hibbert said of the challenge: “Climbing Kilimanjaro is only part of the story. My true ambition is to enable every spinal cord injured person to receive the specialist care and support they need to live the life they choose and reach their full potential. I want to start a movement that will create a better and fairer society for disabled people.”

However, the biggest challenges on the mountain for Martin personally were maintaining a healthy bladder using a catheter, a functioning bowel and regulating skin temperature.

These are some of the biggest obstacles that impact people with a SCI and being on the mountain without access to medical resources, and the change in temperature from base camp to the summit, made things far more difficult. Without proper care and consideration, Martin could easily have suffered an infection, which would have stopped any climbing ambitions immediately.

Whilst on the climb, Martin used a specially made trike, designed by Mountain Trike, which used levers to manoeuvre up the mountain, as well a multitude of other modifications.

On the most inaccessible parts of the climb, the team had to use ladders, as well as push and pull the trike using elastic straps to lift and move the trike in mid-air.

The team had been training for years to take on this challenge, however, for Martin, it wasn’t about reaching the summit, it was a personal mission to raise awareness of the endless everyday mountains that those affected by SCI must face, from inaccessible infrastructure, to lack of sexual function, to pressure sores; and what more should be done to help address the challenges.

“Two years ago Martin Hibbert and I were listening to our SIA charity report on hundreds of cases of spinal cord injured people who could not get back to work, could not even leave their house, or keep a basic level of good health, just because of the lack of proper care and support. Martin turned to me and said ‘we need a revolution’.

Martin decided that in order to get people to listening and understand about the horrendous situation faced by so many spinal cord injured people, he needed to do something where people said “he did what?!” Now Martin, a survivor of the Manchester Arena bombing, has scaled the highest mountain in Africa! His primary aim is to raise £1 million to make sure every single spinal cord injured person can get support from SIA – from our specialist nurses, counsellors, occupational therapists, support coordinators and most of all advocacy teams, to ensure no one in the UK in 2022 has to live a life paralysed by society.  Please support him.  His feat is immense and awe inspiring, but the revolution Martin wants has only just begun”.

If reading Martin’s story of climbing 19,340ft has inspired you, please donate towards the challenge.

A big thank you to our sponsors:

As well as partners: